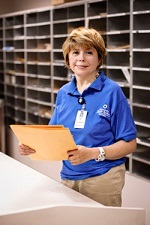 While on her way to work one morning, Angela had a stroke. Angela was able to start her recovery as part of the Reeves Rehabilitation Outpatient Brain Injury Day Program. Just eight months later, she was back to an active lifestyle.

Angela graduated from the program and has volunteered at University Hospital, giving back to the program that gave her so much.

Monica's Patient Story
Monica was in a horrific car crash. Learn how she is able to walk again by beating the odds.
Watch this video