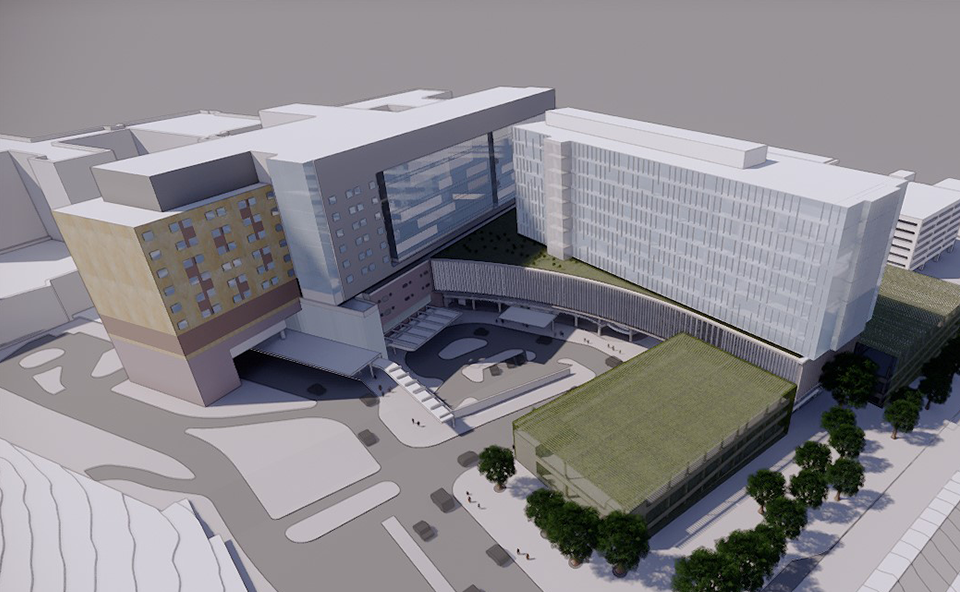 (SAN ANTONIO, TX – August 21, 2018) A planned 302-bed Women’s and Children’s Tower at University Hospital moves into the design phase with the selection of architects and a newly finished master planning study.

The $452 million project, which also includes a new heart and vascular-advanced endoscopy center to be built in the hospital’s Sky Tower, will be completed in at least three phases aimed at minimizing disruption to operations and parking.

MarmonMok|ZGF, which conducted the initial study, was selected as the project’s design team by the Bexar County Hospital District Board of Managers at its July 31 meeting.

At the same meeting, the Board of Managers approved a resolution supporting the hospital’s plan to seek a newly created state designation as a Level IV maternal care program — the highest level of maternity care. That would complement the hospital’s recent designation as a Level IV neonatal intensive care unit in keeping with the goal of the new tower, which is to create an integrated and innovative women’s and children’s facility capable of the most complex care.

Once the design is complete, the three construction phases will be:

A fourth phase that could create additional shell space between the Women’s and Children’s Tower and the West Garage is an option in the plan and might be considered at a later date. No timeline for completion of the project has been finalized. The design team and staff are looking at various construction options that could affect the timeline.

A project manager is expected to be selected over the next few weeks.

The Women’s and Children’s Tower is an extension of University Health's Capital Improvement Program that resulted in the expansion and renovation of the Robert B. Green Campus and the million-square-foot Sky Tower at University Hospital. Those two projects went a long way toward creating state-of-the-art clinical spaces and modern patient rooms for most of University Health’s signature programs, including heart surgery, neurosciences, transplantation and trauma.

But unmet needs remained — partly because of the unanticipated return of UT Health pediatric specialists and their patients after discussions to build a collaborative new children’s hospital proved unsuccessful. Their reintegration took place after the Sky Tower was nearly complete.

The new tower will enable the pediatric unit on the seventh floor of the Sky Tower to become an adult inpatient unit as originally intended, allowing adult medicine programs room for future growth as well.

Bexar County Commissioners Court in September 2017 approved a financing plan for the new project, which will be funded through the sale certificates of obligation and capital reserves.